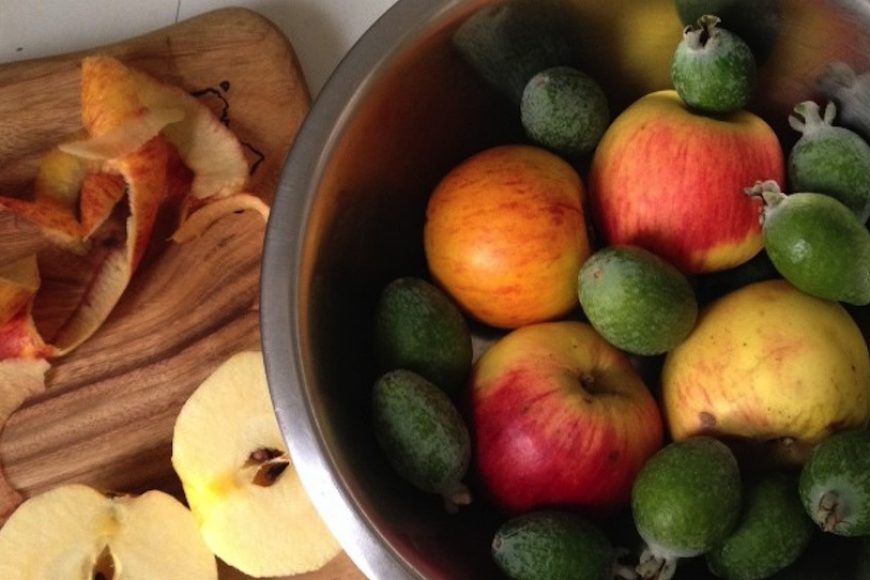 What’s an Apple and Feijoa Scrumble you ask? Why, it’s just like a good ol’ apple crumble, only scrummier!

This quick autumnal dessert is great for using up the last of your apple and feijoa harvest, and a pomegranate or two if you’re lucky enough to have them. It uses honey and rapadura for sweetness (both much better for you than conventional sugars) but it is still sweet, and a definitely fits our criteria for a “treat”!

We also like to use a mix of spelt and wholemeal flour for the topping – it adds a lovely wholesome nutty flavour and it’s (again) a bit better for your tummy.

Enough with the talking already… onwards to the kitchen!

Apple and Feijoa Scrumble (aka Crumble)

Preheat oven to 180c. Peel the apples and feijoas and slice thinly. Place in an ovenproof dish, drizzle over honey and stir through cinnamon. Sprinkle over pomegranate jewels.

Put topping ingredients in a bowl together and rub through the butter by hand until it reaches a coarse consistency (no big chunks of butter, but not the consistency of sand either). Or  you can just cheat (we do!) and pop it in a blender for a few pulses, stirring in between to ensure the mix gets blended evenly.

Spread topping over fruit and place in preheated oven. Bake for 45 minutes, or until golden on top. Enjoy with your favourite luxurious dairy treat!

(The scrumble below was devoured by six people in under 10 minutes, but it could feed a less greedy bunch of eight quite easily!).