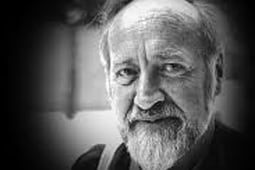 Last year a giant of the forest of humanity fell, with the news that Bill Mollison passed away in September. Our favourite Permaculture-punk-funk-fusion band, the Formidable Vegetable Sound System have created a moving tribute to Bill with their new song “Trees eat us all”, filled with many of his cracking one-liners.

For the song the Formidable Vegetable Sound System have collaborated with Hugo the Poet, who spoke to Pip about how Bill inspired him and why he felt compelled to write a song about Bill.

“Bill Mollison was an inspiration on every level. A much missed visionary Australian hero to be truly proud of in the midst of so much of which to be ashamed. A raw intellect, homespun orator, wise activist, a sage teacher – and one of the only people, along with David Holmgren, to have been able to give the normally very depressing question of ‘how is humanity going to avoid killing ourselves and the planet?’ an answer that is practical, proven, and yields a lifestyle not of restriction and po-faced misery, but of abundance, health, happiness and fun for all. He one billion percent deserves odes to be sung in his name by all the great poets of the age. In lieu of that, this is my humble effort… thank goodness I get to collaborate with Charlie, Kylie and Mal to elevate it to such sublime levels. Goodbye, Bill… may your wisdom spread like so many branches shading out people’s lawns forever.”

“I never met Bill personally, but a couple of weeks before he died, I recieved word from his daughter, Fran that he’d been laughing and singing along to the Formidable Vegetable CDs I’d sent him a few months earlier. This was truly humbling to hear and when he began his journey into compost, I figured the least I could do to honour this man’s life was to write a song for him (with emphasis on his famous dislike of lawn). Thanks for getting this Permaculture ball rolling, Bill.”

And we totally agree too!

Love the Formidable Vegetable Sound System? You can get their albums in the Pip Shop here & here